:
I recorded the ambient sounds at three locations in the wilderness of Aialik Bay in Kenai Fjords National Park, Alaska between 25 June and 21 September 2019. My aim was to capture an ecoacoustic snapshot of the coastal soundscape to provide a comparable baseline for evaluating wilderness characteristics defined by the Wilderness Act of 1964. I visually and empirically characterized the Aialik Bay wilderness soundscape using the acoustic metrics of soundscape power (normalized watts/kHz) and Normalized Difference Soundscape Index (NDSI) from 5373 five-minute recordings, combined with visual and aural spectral examination of 4386 recordings. Soundscape power exhibited similar patterns across frequency intervals with sound sources primarily occurring in the low-frequency (1–2 kHz) and mid-frequency (2–5 kHz) intervals. Significant differences within frequency intervals between sites suggested the presence of distinct sonotopes. Low-frequency sounds were dominant across all three sites with peak soundscape power values across study days and 24 h timeframes attributed to wind and occasional periods of technophony emitted from commercial tour boats and private boating activities. Low-frequency geophony from wave action was ever present. Technophony exhibited some predictable patterns consistent with the timing of sightseeing boat tours. Peak values of soundscape power at mid-frequencies were attributed to the geophony of rain. Although biophonies were less common than geophonies, the choruses of songbirds were prevalent in July and promptly occurred daily between 0300 and 0600. Biophonies generally declined over the course of the day. All sites displayed negative NDSI values over most study days and consistently negative values over 24 h time frames, indicating a soundscape primarily influenced by low-frequency geophony and periods of technophony. However, NDSI values showed patterns and peaks similar to biophonies at mid-frequency intervals indicating biophony was still a notable contribution to this geophony-dominant soundscape. Despite the acoustic footprint of motorboat noise detected at all sample sites, the soundscape of the Aialik Bay wilderness was dominated by the natural sounds of geophony, biophony, and occasional periods of natural quiet indicative of a wilderness only partially impacted by technophony.
Keywords:
Alaska; acoustic index; coastal; ecoacoustics; soundscape; wilderness

I conducted my research in Kenai Fjords National Park (KEFJ) located on the eastern Kenai Peninsula of south-central Alaska (Figure 1). Kenai Fjords National Park includes 2000 km2 of the Harding Icefield from which dozens of glaciers extend into the Gulf of Alaska carving out steep fjord systems with approximately 700 km2 of varying successional stages of coastal maritime rainforest. This dynamic ecoregion consists of a diverse array of ecosystems that include intertidal communities, coastal meadows, anadromous riparian systems, subalpine shrublands, mixed conifer-deciduous forests, old growth mountain hemlock (Tsuga martensiana) forests, and alpine tundra. Elevations range from sea level to 1970 m and temperatures can range from −30 to 4 °C in winter (November–April) and 10 to 25 °C in summer (June–August) (PEDA2 RAWS data Alaska; https://mesowest.utah.edu/). Average annual precipitation has ranged from 18.3–38.3 cm between 2012 and 2019 with annual snow depth averaging 8.7–89.1 cm over the same period (PEDA2 RAWS data Alaska; https://mesowest.utah.edu/).
Kenai Fjords National Park manages 2304 km2 of its jurisdictional land as EW. The variety of ecosystems encompassed by KEFJ EW provides an outstanding and diverse sonic environment generated by geophysical processes and soniferous animal communities and mechanized human transports. I focused my study efforts in the highly visited coastal wilderness of Aialik Bay, a region that is only accessible by boat, plane, or helicopter (Figure 1). Aialik Bay possesses two tidewater glaciers (Aialik and Holgate) and one lake-terminating glacier (Pedersen) that are popular sightseeing locations for boat and air tours. This glacially influenced fjord system is dominated by conifer forests, subalpine shrub, and alpine tundra with an array of freshwater streams and lakes fed by snow melt from the surrounding glaciers and mountain peaks, supporting a variety of wildlife.

Three sample sites were selected so that all had the acoustic vantage point of capturing marine- and terrestrial-based sound sources (Figure 1). Each site provided a different spatial coverage of the fjord and represented three different habitat types at varying elevations and distances to the coast (Table 1). These sites included Aialik Bay Ranger Station (ABRS), Holgate Public Use Cabin (HOLG), and McMullen Cove (MCML) (Figure 1). All sample sites were generally located within forested edge habitats to the coast.

SM4 Song Meters (Wildlife Acoustics, Inc., Maynard, MA, USA) were used to record the acoustic environment in right-channel, mono-aural, at a sample rate of 22,050 Hz for a useable frequency up to 11,000 Hz. Recordings were conducted for five minutes every 55 min for a total of 120 min of acoustic recordings per day. Microphones were calibrated to the default sound pressure level of 94 dB. Sound recorders were mounted to the trunks of trees at approximately two meters above the ground. Microphones were omnidirectional and were mounted to prevent obstruction from all sides. The standard stock foam microphone covers were used to reduce wind disturbance to the microphone’s surface. Sound data were saved to 32 GB SD cards in WAV format and archived in KEFJ’s sound database. Sound monitoring was initiated at ABRS on 25 June 2019 and at HOLG and at MCML on 27 June 2019. Sound recorders were visited in July and August for maintenance and data collection then retrieved on 21 September 2019.
Sound events were captured for the entire duration of the sampling period at HOLG and MCML from 27 June to 21 September 2019 totaling 86 study days. This equated to 2065 and 2060 five-minute sound recordings, respectively. Acoustic sampling at ABRS was reduced to 35 study days and 1248 recordings from 25–26 June, 07–26 July, and 20 August–21 September 2019 due to bears tampering with and dismantling equipment.

While a variety of acoustic metrics and indices are available (Bradfer-Lawrence et al., 2019), the intention of this study was to utilize the figurative “lens” of soundscape power (Kasten et al., 2012) and NDSI (Gage and Axel, 2014) to describe the current state of the Aialik Bay coastal wilderness. Soundscape power has been successfully used to describe soundscapes in south-central Alaska (Mullet et al., 2016, 2017a) and coastal soundscapes in the Pacific Northwest (Ritts et al., 2016). Although NDSI has not yet been applied to subarctic ecosystems, NDSI is based on the metric of soundscape power (normalized watts/kHz) so it was expected that NDSI could be a useful descriptor as it has been in other studies (Gage and Axel, 2014; Fuller et al., 2015; Eldridge et al., 2016; Schindler et al., 2020).
Acoustic measures were computed in R statistical environment (R Core Team, 2014) using the soundecology (Villanueva-Rivera and Pijanowski, 2013) and seewave-R (Sueur et al., 2008) packages. Computations derived soundscape power after Kasten et al. (2012) as the normalized power spectral density (watts/kHz) at 1 kHz frequency intervals for the frequency ranges of 1000–11,000 Hz for each five-minute sound recording. The NDSI was calculated as the ratio of soundscape power (normalized watts/kHz) corresponding to frequency intervals commonly associated with technophony (1–2 kHz) and biophony (>2 kHz) as described by Gage and Axel (2014).

Figures and statistical analyses were done in Minitab® 19.1.1 (Minitab, LLC. 2019). The patterns of soundscape metrics (i.e., soundscape power, NDSI) were visualized and described for each sample site over frequency intervals, study day, and 24 h timeframes. Statistical differences in soundscape power and acoustic indices were compared between sample sites, across study days, and across 24 h timeframes using 95% confidence intervals (CI). A Pearson’s correlation was calculated to determine the relationship between low frequencies (1–2 kHz) and mid-frequencies (2–5 kHz) where soundscape power was concentrated.
Aural and visual spectral analysis was conducted in Audacity® 2.2.2 (https://www.audacityteam.org/) for 4386 sound recordings associated with distinct peak and minimum soundscape power values over study days. Peak values of soundscape power were defined at the 1–2 and 2–5 kHz intervals on study days with mean values >0.95 normalized watts/kHz and >0.3 normalized watts/kHz, respectively. Minimum values for the 1–2 and 2–5 kHz intervals were identified on study days displaying mean soundscape power values <0.6 normalized watts/kHz and <0.1 normalized watts/kHz, respectively. Each five-minute sound recording was visually inspected as a spectrogram to identify spectral signatures representing unique sound sources. Recordings were then aurally inspected in order to identify specific sound sources associated with study days (Figure 2).

Temporal Variation of Low-Frequency Sound by Time of Day

Temporal Variation of Mid-Frequency Sound by Time of Day

Temporal patterns in NDSI varied by sample site, study day, and over 24 h timeframes. Values of NDSI were negative for all sample sites with values sequentially lower at ABRS (Mean = −0.113 [95% CI = −0.141, −0.085), HOLG (Mean = −0.153 [95% CI = −0.170, −0.135], and MCML (Mean = −0.229 [95% CI = −0.242, −0.216]). The NDSI values across study days mirrored the temporal patterns of soundscape power values of the 2–5 kHz frequency interval over the same period with only five days significantly deviating between metrics (Figure 6 and Figure 10). However, positive NDSI values were only present on 10 study days at ABRS, five study days at HOLG, and zero study days at MCML (Figure 10). Study days with positive NDSI values were attributed to the geophony from mid-frequency rain. Negative NDSI values represented the dominance of low-frequency geophonies from waves and wind relative to the presence of mid- and high-frequency biophonies and geophonies (Figure 10).
The patterns of mean NDSI values over 24 h timeframes were all negative for each sample site (Figure 10). Peak NDSI values were evident at ABRS and HOLG between 0300 and 0400 (Figure 10). These peaks were consistent with the early morning rise in soundscape power values within the 2–5 kHz frequency interval representative of the dawn chorus (Figure 9). The values of NDSI at MCML exhibited a more regular pattern with no significant fluctuations (Figure 10). These results were largely attributed to the regularity in geophony associated with wave action.

The results of this study reflect four important ecoacoustic characteristics of the Aialik Bay EW soundscape: (1) Geophony from wind, waves, and rain is a significant contributor to this coastal soundscape; (2) Technophony from boats has a periodic acoustic footprint that can likely extend >100 m into the terrestrial landscape with degrading effects to naturalness and solitude; (3) Biophony from bird choruses is higher in activity across daily periods between July and August and 24 h periods between 0300 and 0600; and (4) Naturalness and solitude attributed to natural ecoacoustic processes of geophony and biophony currently dominate the soundscape.
The status of KEFJ’s EW naturalness is already in the process of change. With the rapid changes of Aialk Bay’s glaciers, compounded with milder winters, warmer summers, changes in precipitation regimes, seabird die-offs, and fire becoming more common on the western side of the Peninsula, it is likely that the ecological patterns and processes of Aialik Bay’s landscape will be much different in the future than it is now (VanLooy et al., 2006; Hayward et al., 2017; Magness and Morton, 2018). This descriptive analysis of the Aialik Bay EW soundscape sets a baseline of information for future comparisons. Annual sampling of the area can conceivably reveal acute variations in soundscape components, documenting incremental change. Long-term sampling will provide a broader temporal view of whether the soundscape is changing with increased human activity (e.g., technophony) and climate change-related impacts to the biological and geophysical environment represented by biophony and geophony.

This research was funded by U.S. National Park Service.

This project was funded by the U.S. National Park Service. Field work was assisted by K. Mocnik and N. Bawtinhimer. Additional support was provided by the staff of Kenai Fjords National Park. I give a special thank you to A. Farina and two anonymous reviewers for their excellent editorial advice to improve this manuscript. This study is dedicated to the late Stuart H. Gage who inspired this work. The findings and conclusions in this article are those of the authors and do not necessarily represent the views of any government agencies. Any use of trade, product, or firm names is for descriptive purposes only and does not imply endorsement by the U.S. government.

The author declares no conflict of interest. 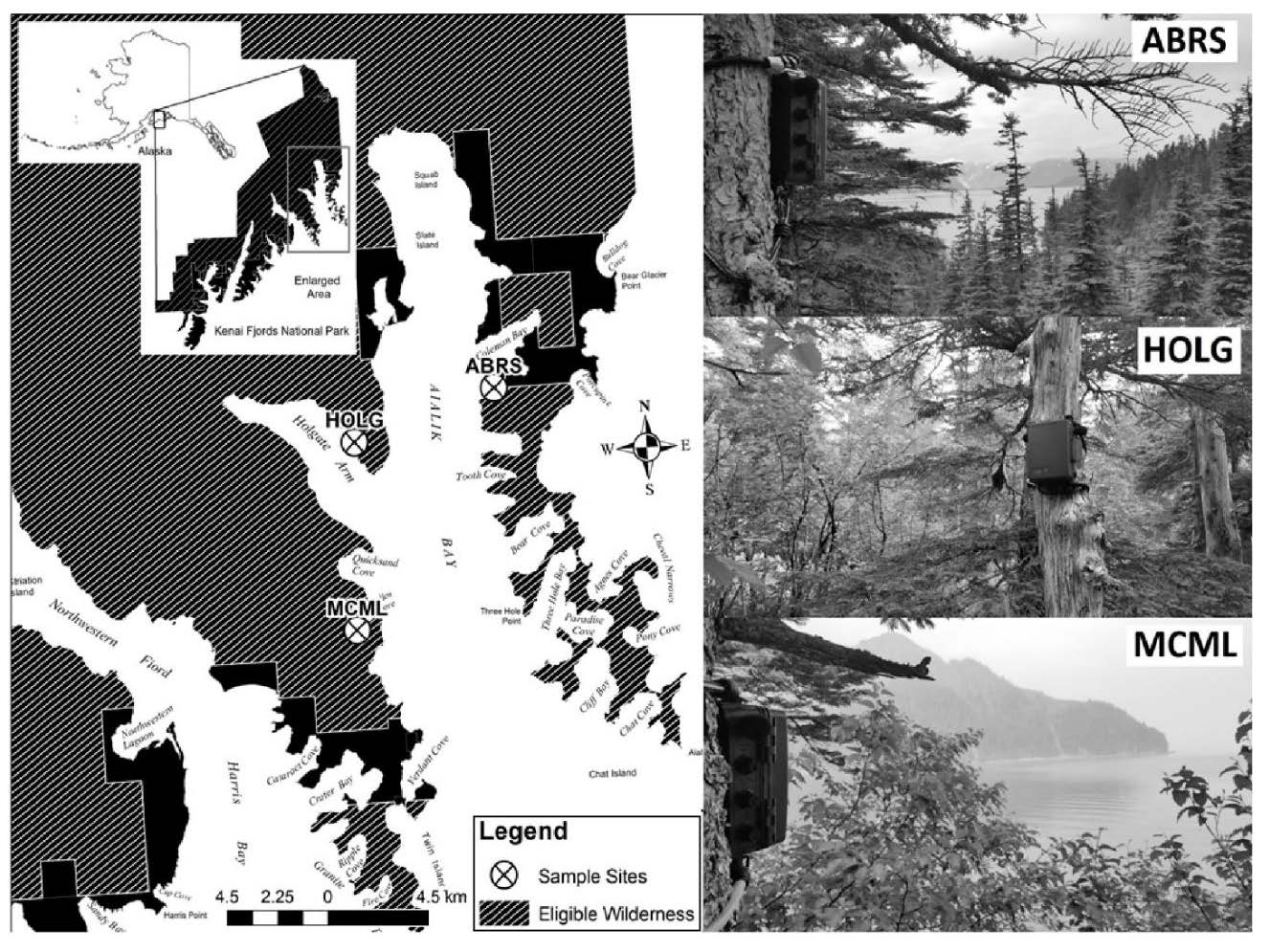 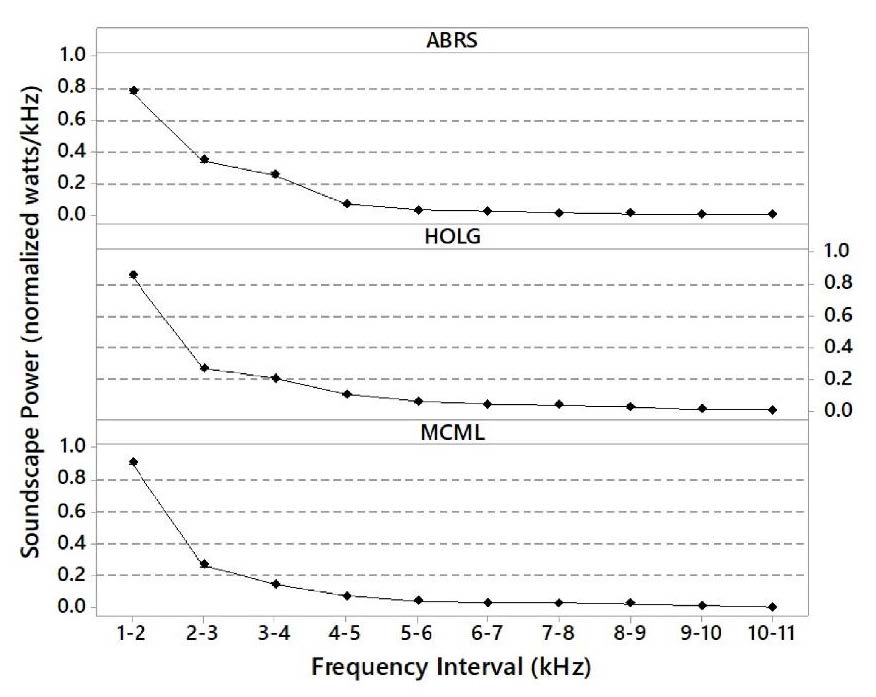 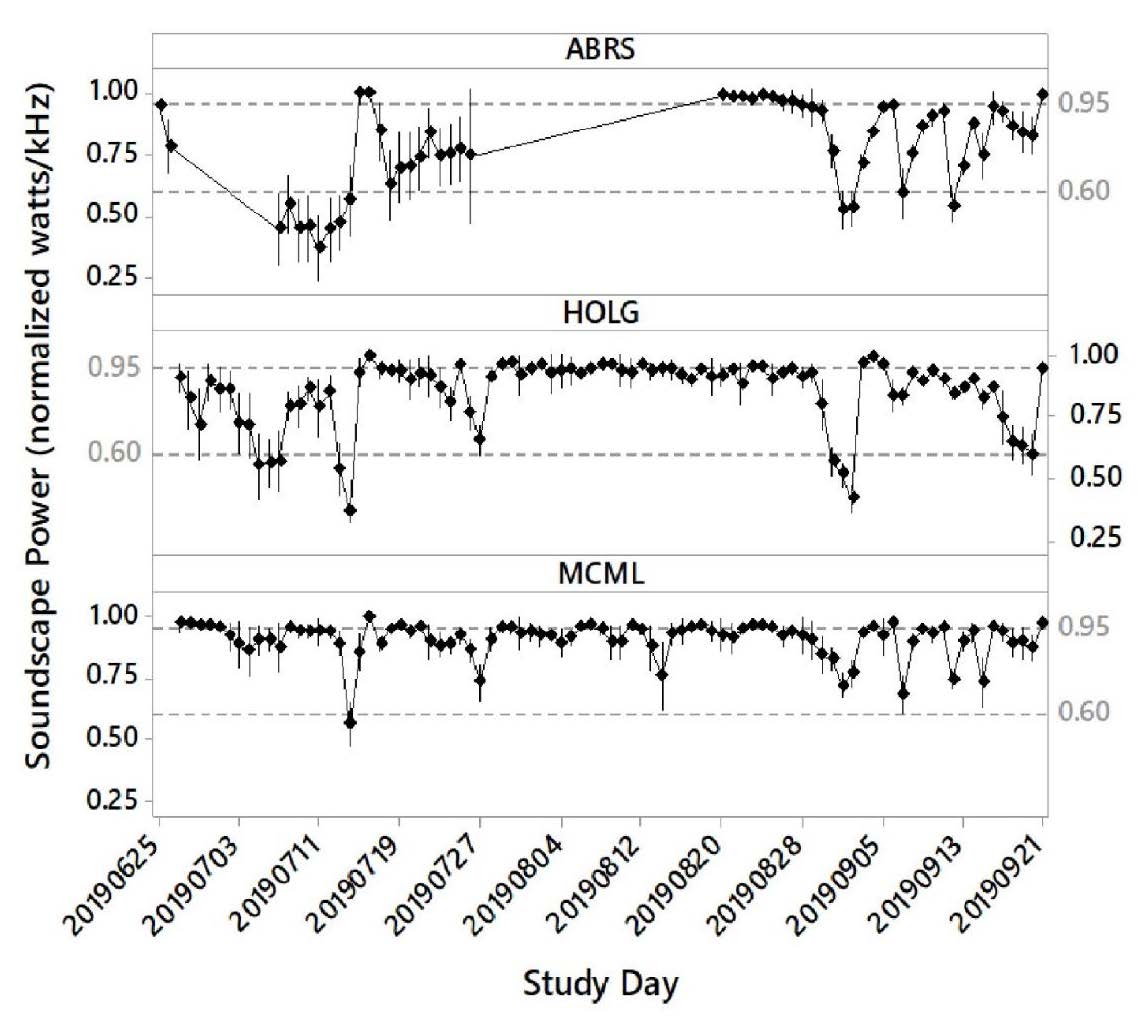 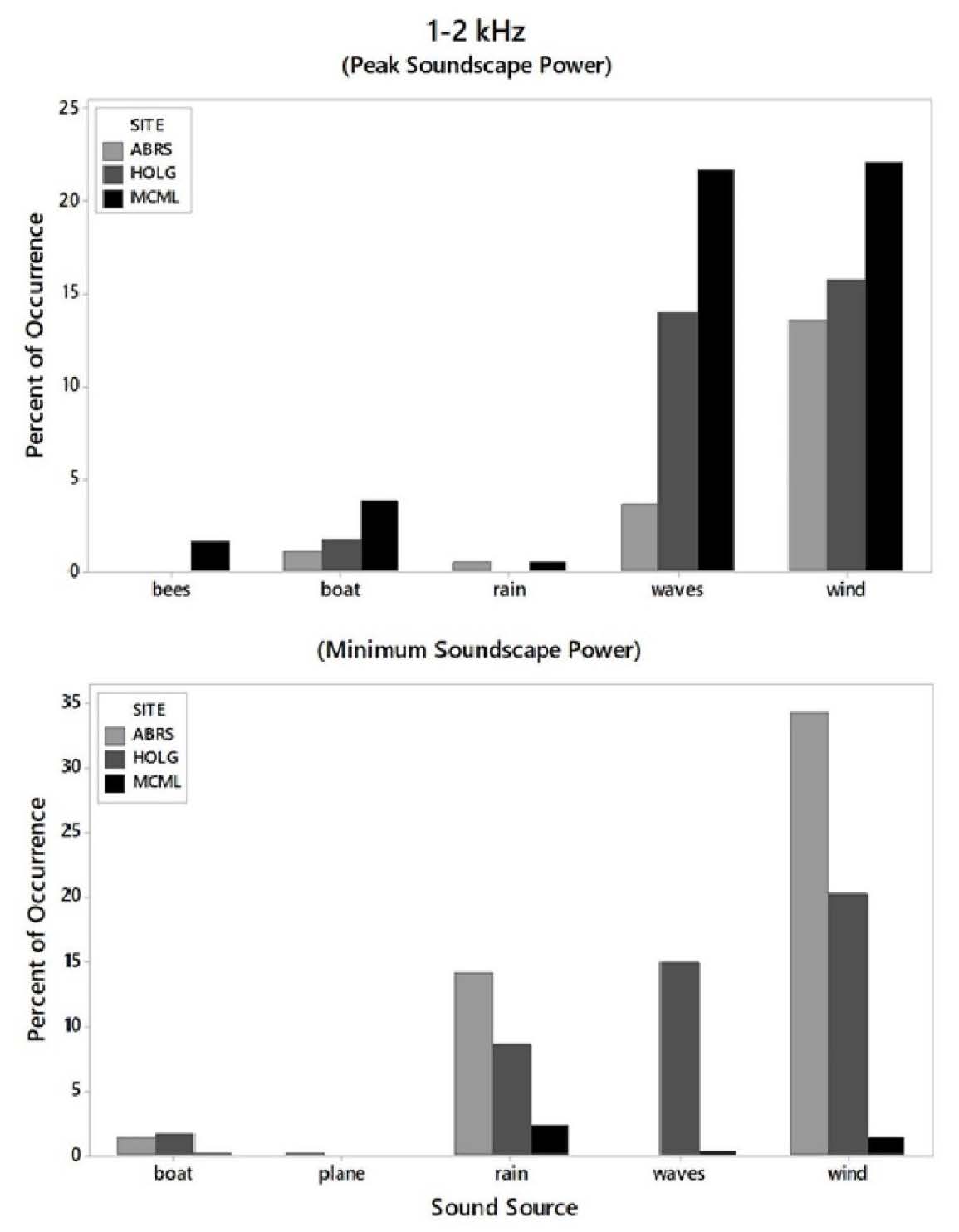 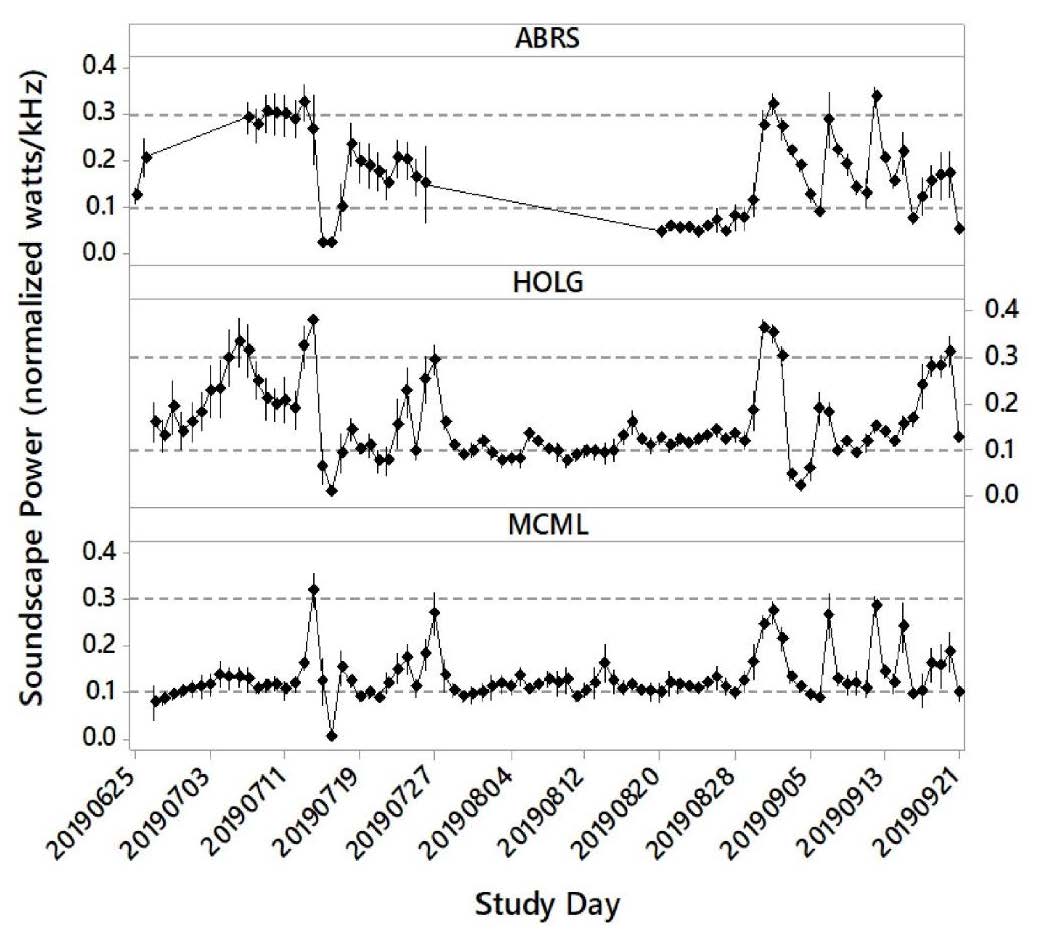 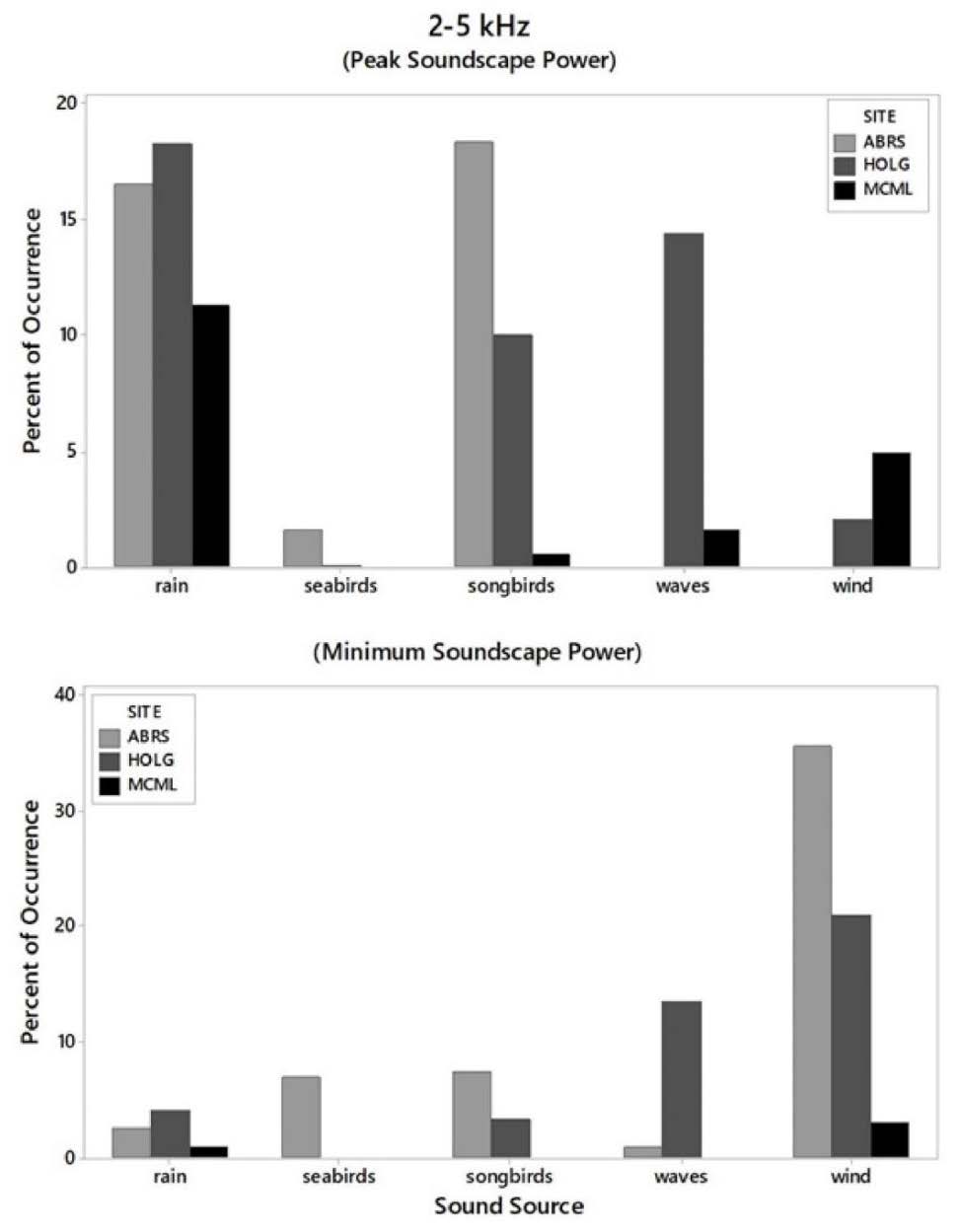 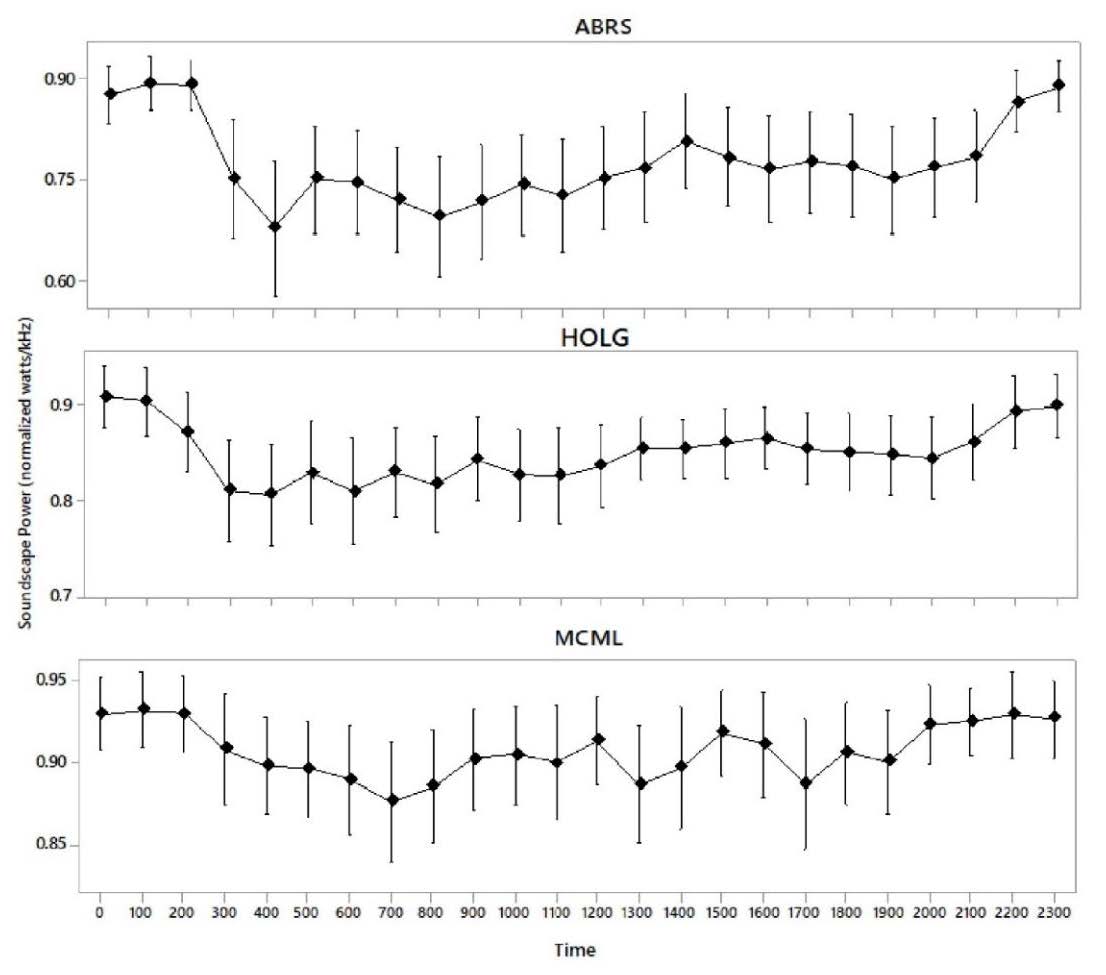 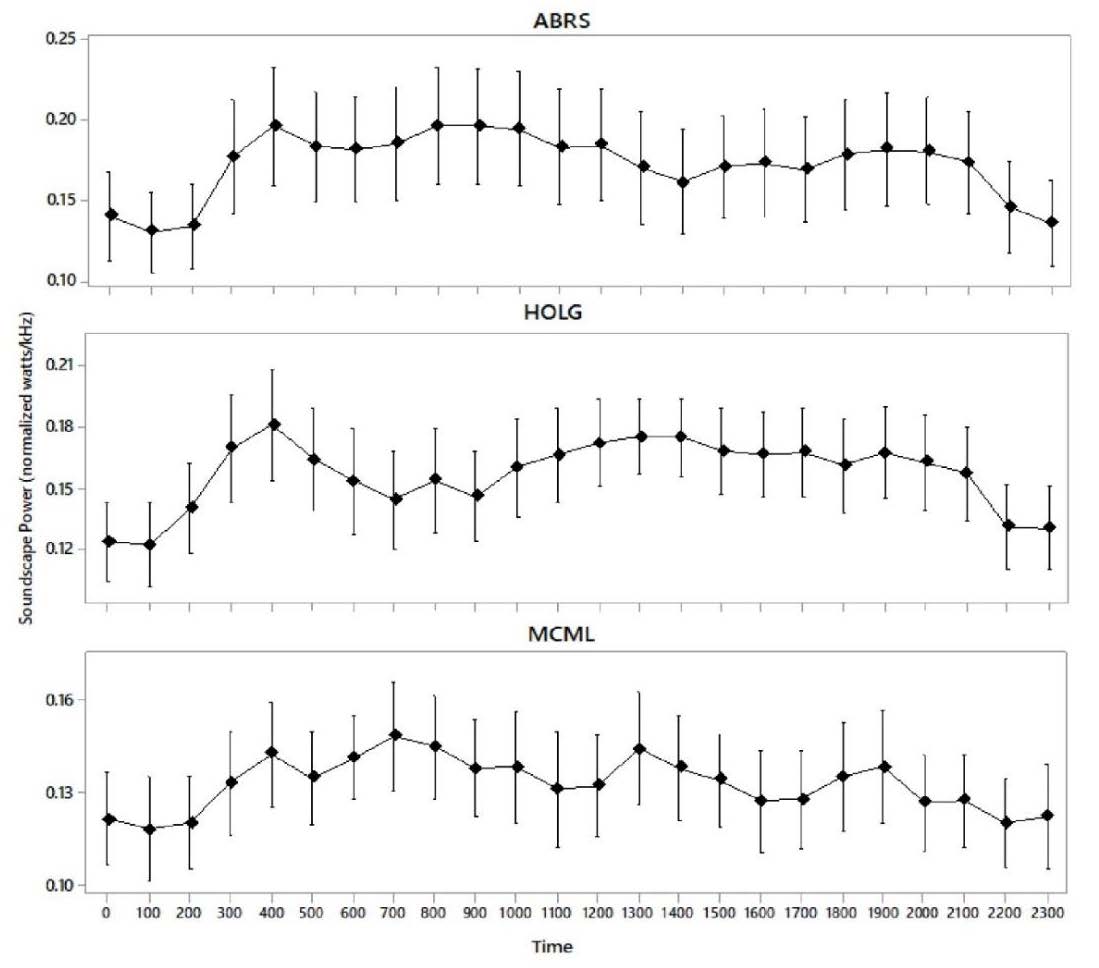 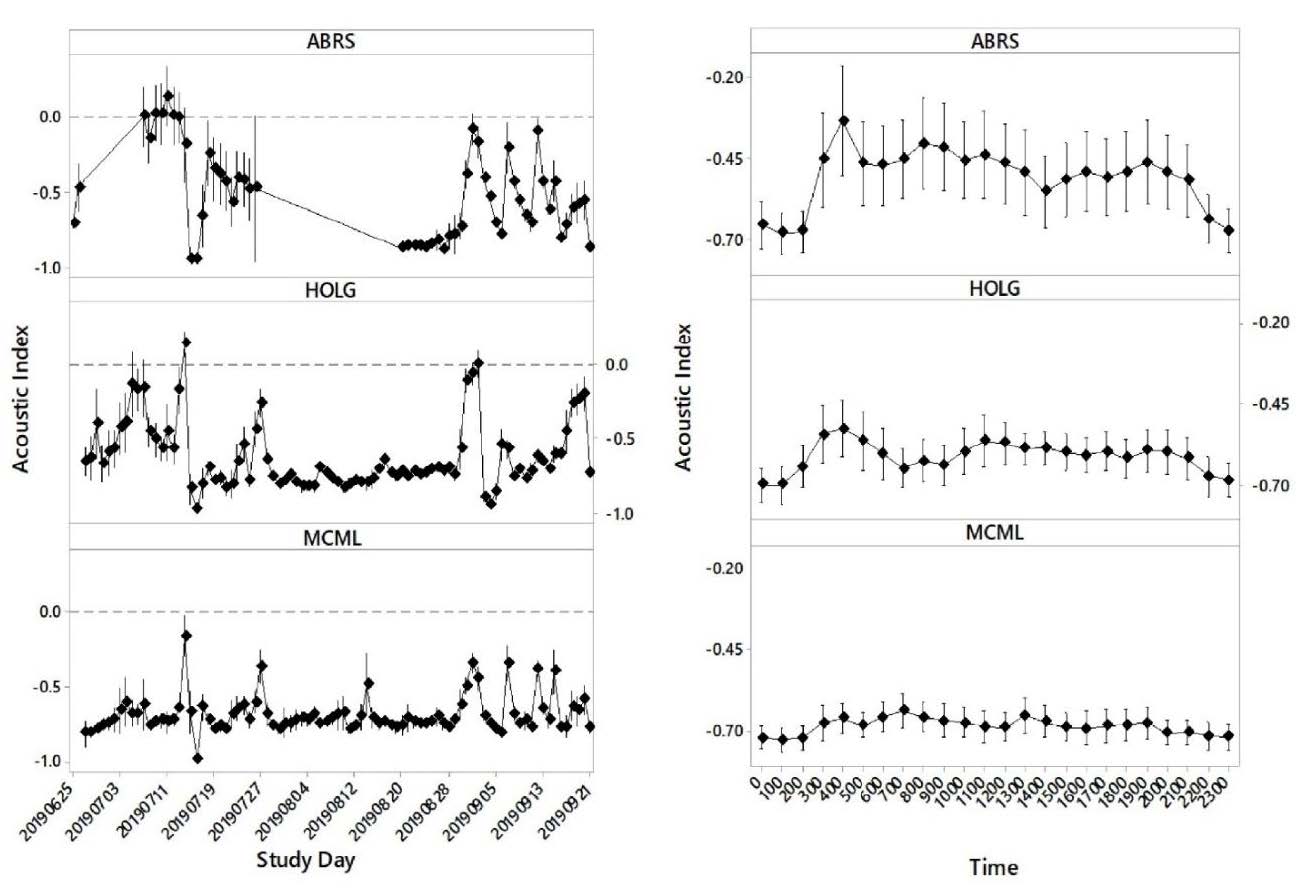